In this article, I will be walking you through a clever technique that can be used to leak addresses and defeat KASLR in the Linux Kernel when you have a certain type of Use-After-Free by abusing RCU callbacks. It is by no means a novel technique and has most likely been leveraged in several exploits.

This is a guide meant to give you a solid understanding of the technique as quickly as possible.

This article was supposed to come out 2 weeks ago but it was delayed due to the Christmas holidays.

The Technique in a nutshell

The technique is possible when we control two objects allocated next to each other in the same slab cache. We must be able to read out-of-bounds through the first object while the second object must have a rcu_head as its first member.

Now that we have a general summary of the technique it is time to go more in-depth.

We have some criteria that have to be met to be able to use this technique.

A certain type of Use-After-Free

This technique applies to objects that meet the following requirements:

We need to have a primitive capable of reading at least 16 bytes out-of-bounds for the slab object. However, it is important to mention that read sizes cannot go over the size limit of the slab cache. So if you are reading from an object in kmalloc-64 you can read up to 64 bytes before the kernel detects the memory leak if the option CONFIG_HARDENED_USERCOPY is on (and chances are it is on the target). This means that your read needs to start at offset 16 bytes from the start of the slab object to be able to read 16 bytes out-of-bounds.

Ex: If you have a kmalloc-64 slab object that occupies the address space from address 0x20 to address 0x60 your read must start at offset 0x30 to be able to read 16 bytes out-of-bounds for the slab object (up to 0x70).

It might be a little difficult to find OOB read primitives like this but they exist even if somewhat conditionally (those OOB reads could only be achieved if the previous conditions about the type of Use-After-Free are met). More on that later.

We need to be able to spray objects that have rcu_head as their first member. We must also be able to ‘update’ those objects.

The objects that will be sprayed must be allocated with the same GFP flag as the primitive that is used for reading. Otherwise, they won’t be allocated in the same caches.

I will provide a simple (fake) example case and go over how the technique could be applied.

For a real case where this technique is used: I have a write-up coming out soon of a vulnerability where I use this very trick to leak an address and bypass KASLR.

Let’s have a type vuln_obj

This is our vulnerability: a vuln_obj object gets freed but it is not removed from the linked list and the previous and next objects in the list hold pointers to it. This causes a Use-After-Free and vuln_obj meets all the criteria we set prior.

Now that we have introduced our example vulnerable object we need to look for a read primitive that matches the conditions we set earlier.

A primitive like that won’t be found just laying around - we need to work a bit to get it. Our vuln_obj is allocated in kmalloc-64 so we are looking for objects that get allocated in that slab cache. In this example, we are going to be leveraging objects belonging to the in-kernel key management and retention facility and the message queue system of the kernel.

Objects of type user_key_payload hold the payload of user and logon keys. This type plays the main role in our story.

This object will be the one we will leak KASLR through (by reading the rcu->func pointer at offset 16 bytes).

In the message queue subsystem, all the messages (struct msg_msg) belonging to a certain queue are in a linked list together. The start (the root) of the queue is a struct posix_msg_tree_node.

It is allocated with the GFP_KERNEL flag and as such will be allocated in the same caches as our vuln_obj.

However interestingly enough messages in the queue are allocated with the flag GFP_KERNEL_ACCOUNT and reside in the kmalloc-cg-n caches. So in our case msg_msg is not a viable primitive.

We do not possess direct control over objects of this type but we can freely allocate them by creating message queues.

Technically the posix_msg_tree_node for each queue gets initiated whenever the first message is added to the queue and not when the queue is created.

Here posix_msg_tree_node is suitable as a primitive because the linked list msg_list aligns with vuln_obj.list (at offset 24 bytes).

If we manage to allocate posix_msg_tree_node in the same slab object where a vuln_obj used to reside we could influence the msg_list->*next and msg_list->*prev via the use-after-free (by initiating other vuln_obj objects).

This structure holds messages belonging to the message queue system of the kernel.

It is important to note:

Now that we have introduced the objects we need to frankenstein them together to achieve the OOB read we need to leak KASLR.

To achieve that we have to do the following:

This is a simplification. In reality, to do this reliably you need to spray a ton of user_key_payload objects to get one right under Object 2. Then you need to mass edit all the payloads and then fetch the first message in the queue.

We said prior that *security always needs to hold a valid heap address. We don’t have to worry about that as it will overlap with rcu_head->next. 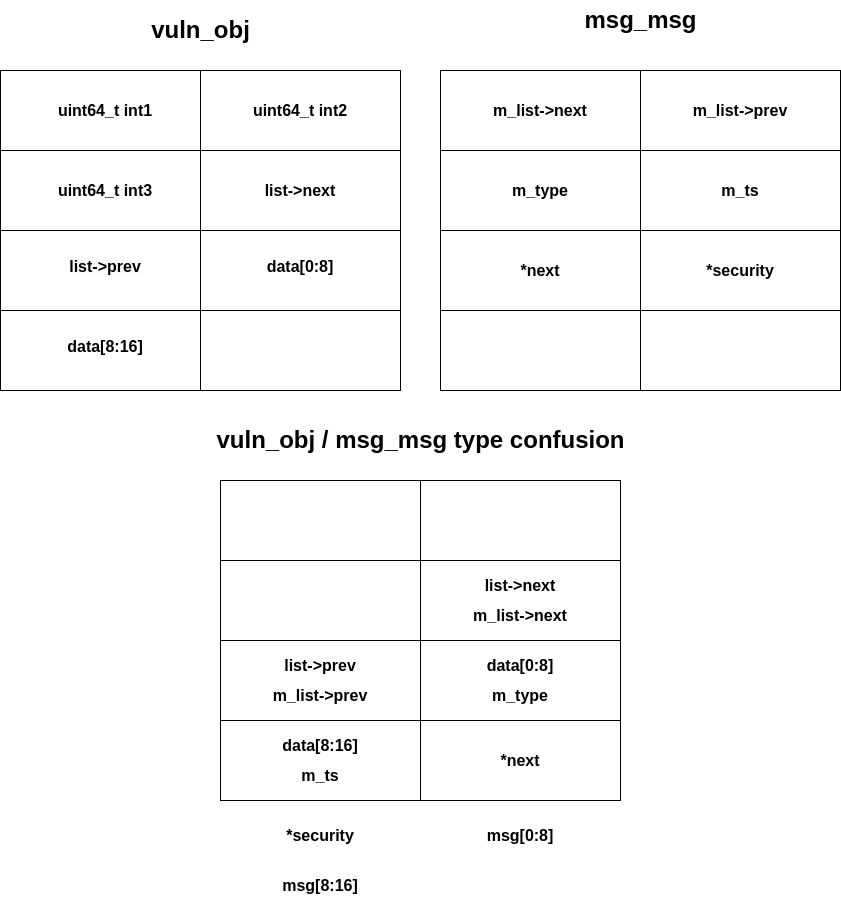 I provided an example which allows the use of this technique. The fake example is very close to the real application of the technique in my next vulnerability write-up (which should be coming out in the next week or two).

I believe the analysis and explanation are not too difficult to grasp but if you have questions feel free to reach out to me.

Keep an eye out for when the write-up drops if you are interested in the “real life” application.